The intervention wants to show the contrast between two typologies of architecture – the first one is traditional architecture linked to the territory, the other one is a linear, almost invisible contemporary architecture dug in the site ground.

The site settled in the area characterized by the presence of a number of buildings without criterion, an urban sprawl, despite it is so near to the city centre. To control the point of view of those are inside the compound, we settled a main level in lower existing ground level. Moreover on the site there was already a farmhouse which had a strong historical and cultural link with the territory, and the new intervention would have upset the existing architectonical style in any case, so we had to find a way to give balance to the system formed by the old and the new.

We chose to settle the activity, except for the existing part (the farmhouse), on a lower level than the ground primal one, creating a space embraced by two glazed wings, in order to protect and to lead the visitors’ sight. Introducing an element as water has the purpose to increase the reflecting surface in order to give the impression of a space wider than the real one, and catch a glimpse of greenery on the slope.

The introduction of new surfaces on different lower levels than the farmhouse one creates a detachment but at the same time a special connection, not just visual but also ideal, between two clashing architectures but keeping the original link the farmhouse had with the surrounding territory. 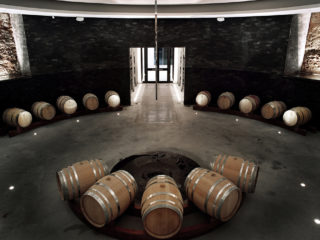 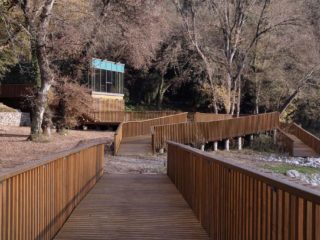